“Before you leave, Katie, why don’t I mark the location in your guidebook?” I had run into Katie, a young British woman extending a work trip in Uzbekistan, in Cafe Wishbone — “the German cafe of Uzbekistan.” We had both stumbled into the cafe seeking respite from the midday heat of Bukhara and, a rarity in Uzbekistan, an espresso. Katie and I had gotten to talking about our travels and bonded over a struggle neither of us had properly anticipated when planning for this trip: accessing our money.

Sure, Uzbekistan’s cities were filled with ATMs and banks, but very few were functional or cooperative. Some were simply dark and powered off. Others would tease you into anticipating acquiescence. Inserting your card, you’d be invited to select your language and the amount of money to be dispensed. Enjoying the air conditioning of the small booth – functional A/C also bring a rarity here – you would do the quick mental math of dollars to soms conversion and click the corresponding button. The screen would shift, the cash dispenser would begin to tick, activating the Pavlovian Money Anticipatory Mechanism (MAM) part of your brain and well known to travelers on the verge of running out of cash, and then, unexpectedly, it would stop.

“Your bank is not responding to the call. Please try back later.”

Now, unless my bank responds to cash requests from Uzbekistan the way it responds to emails from Nigerian princes (possible, yes), I don’t think the problem is on PNCs end.

Frustrated, Jess and I would enjoy one last moment in the booth air conditioning and then set out on foot in search of another ATM. There was the terminal where a local woman was trying her best to be helpful, and was giving advice on which buttons to push. As much as we appreciated the gesture, taking money from an ATM should not have to be a multiethnic collaborative experience. Once, after trying every ATM in the city, desperately short on cash and contemplating how the phone call home to mom to request a wire transfer of money (finding a way to make that phone call let alone a Western Union would be an adventure it itself), we stopped by a small exchange office to ask for help. Despite interrupting the lunch of the young man and his mother behind the desk, he was interested in helping. He grabbed a credit card machine and waved me outside. “Need internet, he said.” I gave him my card which he inserted into the device. He extended his arm, holding the device and my card toward the sky. We stood there, staring at the North Star, patiently waiting for the beam of internet to bounce off of it, or some satellite close to it, and touch down at the PNC in Flourtown, Pennsylvania. The machine buzzed. Request denied. “Let’s try again,” he offered. Insert card. Point device at North Star. Increase anticipatory energy to fever pitch. Wait for response from Flourtown PNC.

Success! I restrained myself from bear hugging my new friend.

He copied my passport, handed me the money, and we were on the way.

Katie handed me her guidebook, and I opened it to the page with the Samarkand street map. I scoured my memory and the map for the approximate location of the successful currency exchange. I tried to envision Katie and my newest Uzbek friend, standing outside with credit card machine extended toward the night sky. I hoped that her bank, somewhere near London, would be as receptive to the call from Uzbekistan.

While it is difficult to get money in Uzbekistan, it is not difficult to spend it. Beautiful pottery, furry Turkmen hats, and carved wooden boxes are the standard gifts of the tourist markets. The prizes to be won, however, are the handcrafted silk textiles, and I say “won” because like many marketplaces, Uzbekistan’s bazaars were hubs of negotiation.

I’ve played the game many times. Show interest, force a price, undercut the price, and, with a smile, use one of several tactics to try to win. There’s the feigned walk away (emphasis can be added with exasperated hands thrown in the air), the check with the wife technique (her facial expression must cast doubt on the viability of the transaction so as to worry the vendor), and the Pile On (I will agree to your price, if you include these other goods, such as the knock-off Hello Kitty purse and squeaky shoes for my daughter, as well). Most of my transactions followed the normal emotional course of thrill in the pursuit and barter, pride in the victory of the transaction, followed by crushing guilt that I had haggled for 5 minutes over fifty cents, and that fifty cents meant significantly more to the vendor than it did to me.

If there was anyone who was skilled at the long game of negotiation, it was likely to be the Uzbeks. Descendants of the Silk Road traders, these people had bartering and negotiation in their blood. Just around the corner from our hotel in Bukhara, I saw it: a purple pomegranate piece made of pure silk. A woman managing the shop looked friendly but forceful, and her location near the Old City meant this was not her first rodeo. “If you feel like you’re getting fleeced,” one guidebook shared, “just walk away. You probably are.” I’d have to prepare for this.

As Jess and I explored the city, we stopped by stalls and shops, feigning interest and asking about prices. I started to get a good sense of pricing. Now it was time to test their buoyancy and the resolve of the stall keepers.

There was a wooden Silk Road chess set on a table.

“How much?” I inquired of the man behind the table.

“No.” The man replied firmly. Just “no.” No rebuttal. Surely, he’d drop his price as we walked away, I thought. We pivoted to leave, and there was no call from him, no “mister, mister” that usually accompanied the Feigned Walk Away (FWA). Huh.

At another stall, the same process played out over a game pitch for a pillow case. There was no back and forth, no negotiation, no pleading.

Confused and thrown off, I decided to return to the woman near the hotel and see what I could manage in a negotiation for the Purple pomegranate piece.

“How much for this one?” I was going to be direct.

We looked at other pieces, sifted through piles, and heard tales of patterns. But I really just wanted the pomegranate. “ you give me special price?” I said with a smile. “End of season discount?”

“65 is end of season discount,” she retorted without expression.

If you feel like you’re getting fleeced, just walk away…

And so we did. I couldn’t believe it – she wouldn’t negotiate. Had I lost my ability to haggle? Grown soft with age? Was all of this mutton messing with my brain? Desperate for reassurance, I turned to Jess. She suggested we talk to the hotel manager about negotiating on the streets.

“Oh, yes, yes, you should be able to negotiate. At least twenty percent, yes.”

Reinvigorated, I suggested we return to the city and walk by the stall, but show no interest in the pomegranate piece. We’d play hard-to-get, and see if that really mature, high-schoolish technique worked its magic.

As we neared the woman’s stall, I slowed to ensure that we made eye contact. “Salaam,” I said with a smile. “Salaam,” she replied. And we continued on our way and she continued refolding tapestries on the table.

What?! She must have recognized me! Had my campaign of disinterest done nothing to whet her appetite for a sale?!

Over a beer, I wrestled with what to do next. This woman was impermeable to my efforts and enters, my humor and technique. “If you want it so badly, why don’t you just buy it?” offered Jess.

Okay, we would return one final time to the stall, and we wouldn’t leave without the pomegranate piece in hand, dignity be damned.

The woman looked up at us without excitement. “The piece – I will give you 60 US.” This was clearly a last, desperate attempt by me to regain some control over this process. She could smell my desperation.

Mercy. Ok. For the first time, the woman smiled.

So I agreed to pay 65 and to put it on a credit card. Oddly enough, this was the only place we found that in Uzbekistan that took credit cards – no restaurants, hotels, or shops anywhere else. Just this woman and her tapestry stall.

I had my tapestry, and she had the victory. She played the long game and won the day, but I had my treasure and every time I look at that purple pomegranate piece, I will remember that woman, the toughest Silk Road negotiator I know.

The True Treasure of Uzbekistan

But the true treasure of Uzbekistan is the sites. The Timurid architecture of the 15th century – the madrassas, mosques, minarets, and mausoleums- with their blue and turquoise tiles that sparkle in the Central Asian sun and change appearances throughout the day. There’s the ancient and abandoned desert fortresses of Khorzeum where you can run along the mud brick walls, and the spice bazaars of the old Silk Road cities. Best of all, visitors have all of these sites virtually to themselves (well, except for the three people there to check your ticket, the two women that exist to open and close every door for you, and the gaggle of employees wandering the site to keep an eye on you), and that’s just cool.

Uzbekistan is one of the most stunningly beautiful places that I’ve ever been. Photos and words cannot do this place justice, although we’ve tried with many a click of my phone and camera, panoramic and portraits, but nothing has truly captured its beauty. I’ve done my best to sear moments and vistas into my mind because one of the wonders and sorrows of travel is discovering a new place while simultaneously not knowing if you’ll ever return. And, if you do return, knowing that time will inevitably bring transformation. Uzbekistan is a treasure unto itself, full of sumptuous and awe-inspiring scenery and history, in part because it is desperately devoid of tourists.

Well, at least, for now. 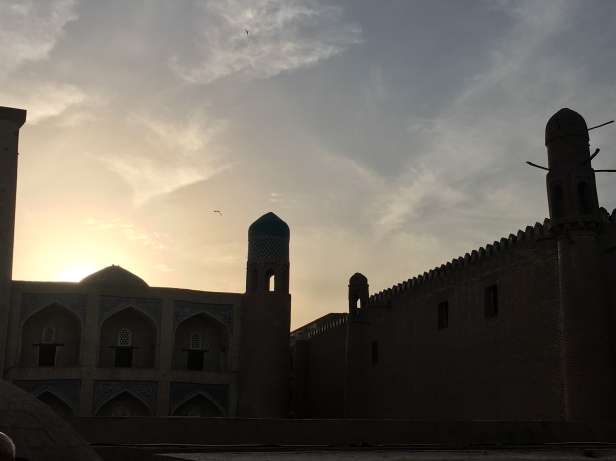 Matt Norcini is an educator, father, and husband who is always looking for the next adventure and a good story. His work has been published in Let's Go: Vietnam and online at TravelMag, Hackwriters, and InTravel Magazine.